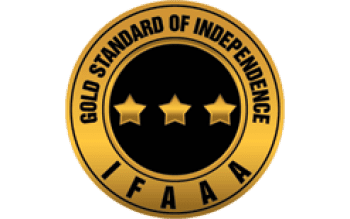 Australians can be assured that an adviser who carries this symbol receives no commissions, does not
charge a percentage to manage your assets (asset based fees), and has no affiliation with any product
manufacturer. This means the adviser can be trusted as genuinely independent and conflict-free.

The President of the IFAAA, Daniel Brammall, explains that whereas the legislation that governs financial
planners is complex, the Gold Standard of Independence TM is simple. “Remove the incentives and all
you’re left with is the right thing to do. So today the IFAAA is launching a symbol that Australians can
now look for to find professional independent financial advice that tolerates no conflict. This is a Gold
Standard for Trust”.

Scandals such as Commonwealth Financial Planning, Storm Financial and WestPoint have all had financial
advisers incentivised by either commissions, high asset fees or sales targets which led to inappropriate
advice which eventually led to the loss of public dollars. While bodies such as the ASIC and the FPA have
called for a commission enquiry into this latest Commonwealth Financial Planning scandal, the IFAAA
maintains that it does not address the underlying problem of conflicted remuneration.

“What’s required to stop these scandals from occurring is something that’s politically impossible to do”,
Daniel Brammall pointed out. “Any government that tried to implement a solution to solve this problem
would be immediately scuttled. The latest example is the FOFA reforms which are now being unwound.
For 20 years or more, the government has tried to reform the industry with band aid after band aid. The
last government and now this one boast they have banned conflicted remuneration. But conflicted
remuneration still exits. It’s perfectly legal.”

“The IFAAA has taken a stand by introducing the concept of the Gold Standard of Independence TM,
which addresses the one reform that is needed in this industry to protect the wealth of Australia. It can’t
be achieved by a government. It has to be done through self reform. With the IFAAA’s Gold Standard of
Independence TM symbol, now Australians can find truly independent financial advisers they can trust.
It’s no longer necessary to settle for anything else.”